The Confucius Institute celebrates 10 years of positive relations between UNSW and SJTU. 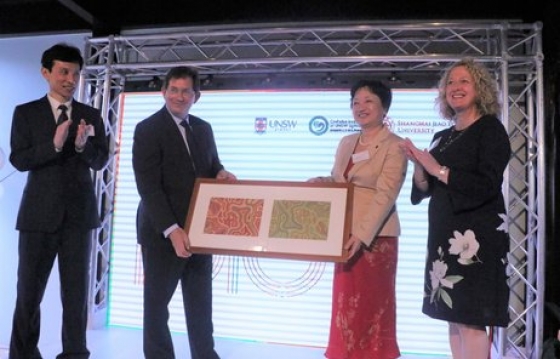 On the 19th of February, a celebration for the 10th Anniversary of Strategic Cooperation between the University of New South Wales (UNSW) and Shanghai JiaoTong University (SJTU) was held the Chinese Garden of Friendship in Darling Harbour, Sydney. Representatives from both universities: Professor Ian Jacobs, President and Vice-Chancellor of the UNSW Sydney, Professor Xu Xuemin, Vice President of SJTU, Counselor Zongwa, Education Department of the Embassy of Sydney, and Mr. Niu Wenqi, Education Counsellor of the Chinese Consulate General in Sydney, attended the event. The celebrations were hosted by Mr. Laurie Pearcey, Pro-Vice Chancellor (International) of UNSW Sydney.

The event kicked off with several touching speeches, starting with Professor Ian Jacobs, who welcomed the guests and highlighted the importance of this 10-year milestone for the two universities in working together in education, innovation and entrepreneurship. By using a traditional Chinese metaphor: “The fire burns higher when everybody adds firewood to it (great things may be done by mass effort)”, Professor Ian Jacobs emphasised the need for cooperation in the current landscape to promote the progress of scientific research and further benefit the wider community.

He also highly praised the Confucius Institute at UNSW Sydney for its great contributions and outstanding achievements in spreading Chinese culture; specifically pointing out that the Institute operates at not only a tertiary level, but also deals with primary and secondary education, and engaging the local community. Finally, he expressed his hope for the two universities to mark the 10th anniversary as a new starting point, where the fire of friendship and cooperation “will continue to burn brightly”.

Following that, Professor Xu Xuemin also delivered a heart-warming speech. She commented on the auspicious date of the 10th anniversary event, which coincided with the Chinese Lantern Festival (based upon the Lunar Calendar). The heightened feeling of connectedness and friendship brought about by both the event and the traditional festival was strongly felt by Professor Xu Xuemin, who mentioned that she truly felt like she was at home while surrounded by new and old colleagues in Sydney. She proceeded to acknowledge the deep progress that both universities have forged in all areas since the inception of the strategic cooperation and expressed her gratitude for what the Confucius Institute at UNSW Sydney has established as well as her best wishes for the future.

A short documentary was shown to the guests after the speeches. It was specially produced for the celebration of the Double Tenth Anniversary and covered the growth of the Confucius Institute and the ten-year history of cooperation between the two universities; including scientific research, student exchange, high-level visits and education management.

After watching the short film, the representatives from the two universities exchanged gifts to represent both the gratitude and hope for even better and deeper exchange and cooperation.

After the ceremony, the guests were able to mingle and interact in the Chinese Gardens and enjoy the beautiful scenery. A traditional Chinese Lantern Riddle game was held, and guests were able to tackle the riddles in both languages and work together to get the answer, demonstrating the spirit of teamwork and strong communication amongst attendees.

The Confucius Institute at UNSW Sydney, as a crucial link, has become a bridge of friendship between the two cultures, two countries.