A bold step along the new Silk Road 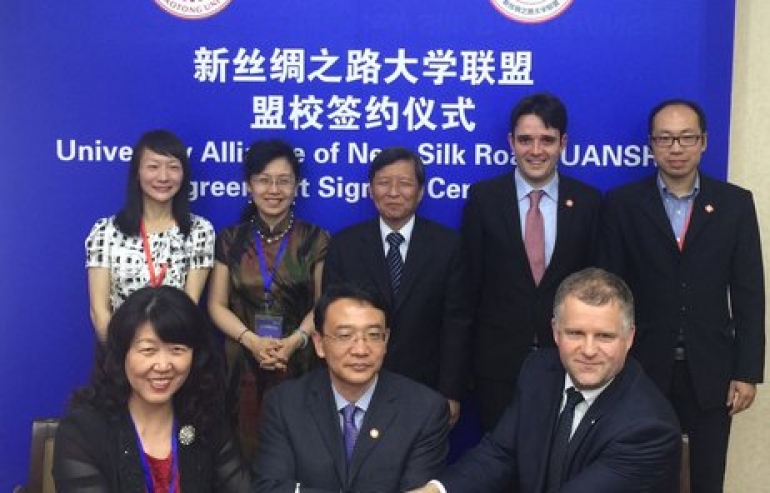 What on earth is the relationship between Tony Abbott’s decision to join the Asian Infrastructure Investment Bank and the fate of the Coalition’s university fee deregulation package in the Senate?

The answer may surprise you.

Designed to address the forecast multi-trillion-dollar infrastructure shortfall across the region, the US$100 billion ($125bn) AIIB is the centrepiece of China’s ambitious ‘One Belt One Road’ foreign policy initiative.

With China’s status as a major political and economic power reverberating everywhere from Israeli technology companies and Pakistani gas pipelines to the Pilbara’s iron ore deposits, Beijing is no longer content simply being an actor in old world geopolitics.

With the Silk Road Economic Belt weaving through Eurasia, and the Maritime Silk Road spreading across South-East Asia and into Australia, China sees this as critical to consolidating growing regional economic interdependence, and core to its political and trade diplomacy priorities.

So what does this mean for Tony Abbott’s stalled higher education reforms.

Putting the AIIB to one side, China is separately investing more than $50bn in a New Silk Road Fund designed to build capacity and further integrate the regional economy.

Led by China’s prestigious Xi’an Jiao Tong University, this month sees the birth of the Universities Alliance of the New Silk Road at the symbolic start and finish of the historical and modern day incarnations of the famed ancient trade route.

The new alliance captures over 60 universities spanning the emerging powerhouses of Asia, the Middle East and Russia as well as some of the world’s great research-intensive including the University of Liverpool, Hong Kong University of Science & Technology, Milan Polytechnic and the University of NSW.

Aiming to do what no institution would be capable of doing independently, this alliance recognises that super regional connectivity to China will be vital to the evolution of the research and innovation ecosystems of the future.

The contrast could not be starker between the political priorities governing China and Australia’s higher education and research systems.

Australia finds itself in the unfortunate position of enjoying the world’s third highest GDP per capita and languishing at the bottom of the OECD for some of the lowest levels of investment in public higher education.

China has embarked on the largest investment in research and development in human history, and the OECD forecasts China will overtake the US as the world’s largest spender on science and technology by the end of the decade.

The cold mathematics of this scenario indicate that Australian universities cannot continue to reinvest fees from large numbers of Chinese international students to subsidise research activity — as Asian universities assume stronger positions in rankings and the value proposition of a degree from Asian institutions will increase dramatically.

Unless Australian universities become part of Asia’s rise, their historic competitiveness will be eroded.

Australia’s very notion of what constitutes the region needs to shift if we are to fully grasp and take advantage of its promise.

The One Belt One Road initiative will see hundreds of billions of dollars of capital fuelling new development in a new super region across all points of the compass in a vast expanse from Hobart to Rotterdam and Nairobi to Vladivostok.

The new skills and technology required to support this super regional economy in a way that does not deplete ecosystems or destroy national balance sheets represents an unprecedented challenge.

Australia’s task is to suspend the parochialism of its current higher education debate before it plunges into the depths of another Canberra winter, and take that bold first step along the New Silk Road.

Laurie Pearcey is a former chief executive of the Australia China Business Council and is currently director of China strategy & development at UNSW Australia.

This article first appeared in The Australian.