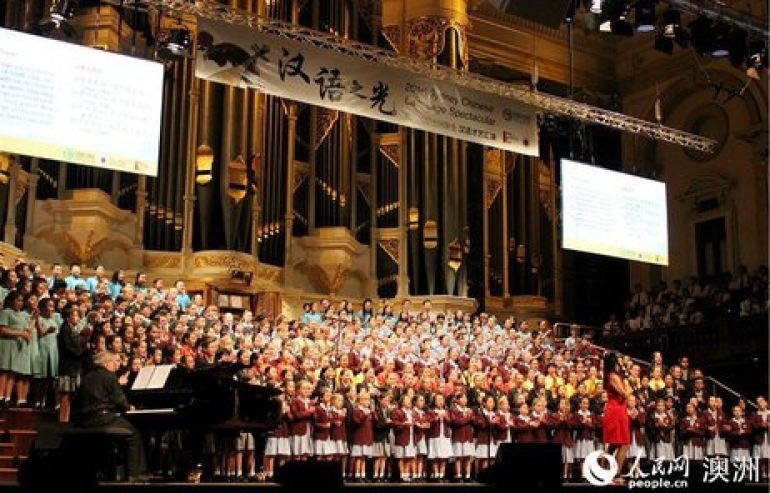 With “Harmony and Dreams” being the event’s theme, it reflects the hope to improve the friendship between China and Australia through harmonious art performance, and to encourage the youth to pursue their dreams. Over one thousand local students from more than 30 primary and secondary schools performed exciting acts and showed Chinese culture based on their understanding.

The showcase began with a magnificent Waist Drum beating and Dragon Dancing, followed by a splendid chorus of Chinese and Australian National Anthem. Student choir groups gave wonderful performances, including well-known Chinese songs “My Ocean, My Hometown” and “Mo Li Hua (Jasmine Flower)”, and classical western music with Chinese lyrics such as “Phantom of the Opera” and “Ode to Joy”. Monkey style Martial Arts “Havoc in Heaven” by King’s School, and the poem “Shuidiao Getou” joint performed by Ravenswood School for Girls and Chinese folk musicians, also captivated the audiences. During the one and a half hours show, the evening merged a diverse range of Chinese elements together, including song, dance, comedy, musical ensembles and drama sketches, enjoyed the audiences with the charm of Chinese culture vividly。

Consul General of the P.R.China in Sydney Gu Xiaojie, warmly praised the student performers on their enthusiasm about Chinese language and culture. He stated that such event would definitely further enhance the mutual understanding between China and Australia.

Fiona Docherty, Vice President International, Marketing, and Communications at UNSW Australia, said in her speech that the demand for Chinese Language learning is continually rising, not limited within UNSW, but Australia wide. The principal of Mosman High School, Susan Wyatt, also said that their school would affirm to continue supporting Chinese teaching, and promote Chinese culture.

Over two thousand audiences, including representatives from the NSW Department of Education, principals of primary and secondary schools, and other distinguished guests enjoyed the showcase. Due to its far-reaching significance of cultural transmission, the annual Chinese Language Spectacular has successfully attracted attention and praise widely, since its beginning on 2014. It is regarded as the most prominent Chinese language and culture annual event.